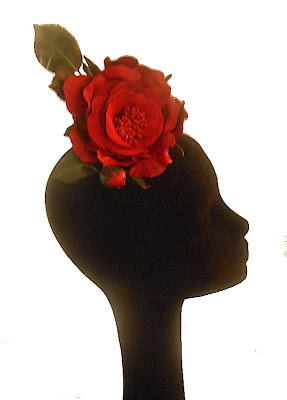 I had all intentions of making a live video showing how I shaped these leather flower petals without using traditional flower making tools, as I hinted to doing in a previous post.  But as I was completing this post, one of my last two aunts passed away.  When I would visit her, she would always grab my cheeks, screaming, "My favorite niece! My favorite niece!"  My other aunt, having no children, was feed up with years of this asked me, "Do you realize that you are her only niece?"  I was in my 30s, and never realized this fact.  So, at my aunt's funeral, I had this flower placed inside her casket.  Thank you so much auntie (the both of you) for making me feel as if I were the only niece in the world. 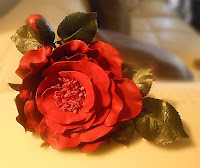 Last year I posted a similar flower making post on using non-traditional tools to shape fabric flower petals.  If you haven't read the post, I suggest that you take the opportunity to do so because I give references to resources that will show you how to assemble an artificial flower. Plus, some of the things shown in the fabric flower petal video will be of help to you if you are not familiar with making hand made flowers.  Maybe somewhere down the road I'll make a live flower making video; I'm just not feeling it now, as my remaining aunt has been ill.

Anyway below is my video/slideshow showing the leather flower shaping process I used when making the red leather rose.  Also following is a video wherein the edges of the flower petals were shaped; this is the method I used.  Although the flowers in this video are made in silk fabric, the method of shaping the edges of the petals is the same.  Finally, follow my flower making board on Pinterest; there is plenty of information there on flower making.  Enjoy!!

Posted by Lee Duncan is HatStruck at 10:07 AM 16 comments

Images From Hatstruck Millinery Class: The Fedoras Stole the Show!

On a more upbeat note, the class was a blast!  Mike, our only male, kept things spiced up--you were too funny Mike! Ola, you are too generous; thanks for all of those snacks.  Natasha, you are so nice.  And Mrs. Edwards, thank you so much for sharing your hats and knowledge with us.  Every time I could not remember something, I would consult my dear teacher.

To your upper left, is Natasha.  Natasha was on a mission to make one of her friends a fedora modeled after one of his vintage fedoras.  I must say that she knocked it out of the park.

As mentioned, Mrs. Edwards stopped in.  She  brought two hats from her vintage collection, including two hats that she personally made. She made the beautiful flower hat to your left in the early 1960s.  She also made the pearl-appliqued pillbox to your right.  However, one of her students made the flower many years ago.  Although we originally rolled the edges of these types of flowers using our own saliva (spit-rolled), this one was rolled by adding glue to its edges.

Ola fell in love with my square crown hat block, and besides making an open-crown pork pie floppy straw hat in the first session, she also blocked two felt hats from the square crown block. There are several things that will make a fur felt hat look amateurish, some of which include leaving in a rope line if trim will not be covering it; blunt cut brim edges; turned up brims showing flat surface when the remainder of the hat has a nap.  The latter issue drives me crazy.  So, on this hat, Ola was shown how to turn the upturned brim of this hat into the same velour finish as the crown.

Mike, yes Mike, I threatened to tie his hands and gag him; he had lots of energy.  Anyway, Mike also wanted to make a hat for a friend; so, in the first session he made a fedora, see left image.  Although the block head size was true to his head size, there was a gap between the hat and the sides of his head.  So, I shared with Mike how he could get a custom fit in the same manner that hatters did using a conformature (a head sizing device invented in the 1800s, today costing several thousand dollars), except he could get the same results for little or no cost at all.  So, Mike went home and created his own custom hat block using some of my custom fit suggestion, including the instructions for making your own hat block from a post here on this blog.  He also made his own block spinner (block stand).  See image in upper mid-right.  In this image, Mike is beveling the brim edge.  Anyway, the final hat shape that Mike decided on is what he described as a "modified cattleman."

Although it was not my intention to turn this into a hatting class, this is where all of the students wanted to go.  Hatting, the making of men hats, is extremely labor intensive. We stayed long hours working on these hats. All but Ola's hat, above, were blocked on an open crown block, a block having no definition.  All of the shaping was done by hand.  Hatting requires many more steps than a milliner would employ to make a fedora, but hatting is fun and exciting despite its labor intensity.

Below are a few more images. They are not in any particular order and there are many procedures missing. Enjoy!

Posted by Lee Duncan is HatStruck at 4:18 AM 10 comments