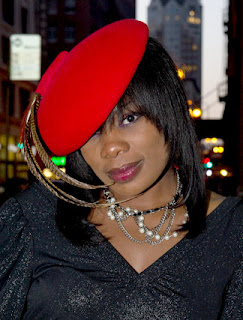 I just received an email that stated that I was only giving a hatting (men hat making) class, and to please inform "me" when a women hat making class was being given.  I don't know where this came from, but the upcoming class (August 27th and 3rd) is a straw and felt blocking class, women hats included. A gentleman attending my class is interested in making hats for men, and of course, I'm more than pleased to accommodate him because the fedora is my favorite hat.  We will be touching on the most important hatting techniques.  As a matter of fact, I use some hatting techniques when making my hats, especially felt hats.  If it's anything I hate is a dead unpolished felt hat.

Also, as I've mentioned to those inquiring about a class schedule, I do not have a schedule; I do not give regular classes; and I probably will never give regular classes.  As much as love millinery, there are many other things, including my furthered millinery learning, I have to explore before I leave this earth, if God is willing.  This class was scheduled because of the large number of people requesting a class.   Unfortunately, most of those have not responded, and I put off a trip out of state.  My family has aged and is passing away, and I would really love to move about without having other commitments holding me back.  So catch me when you can, or if there are those out there that would like some referrals, I would be more than glad to refer out.  This does not take anything away from me.

Back to This Class

For all of those that say "I know how to block straw and felt,"  well more goes into it than steaming material and pulling it over a hat block and tying it down--classic YouTube.  It includes a knowledge of how hat blocks work and how they are used, and how they are underutilized.  If you're new to millinery and many of the not so new, I know you think you already know all about that.  Well, the hat to your upper left looks nothing like the block it was blocked on, yet many will leave the hat just as it came off the block (although anything goes), because they just don't know any different.  I have a pretty common cap block, and when I see some others block on it, I often wonder why they've left the hat unfinished.  It's because they don't understand how to use the block. 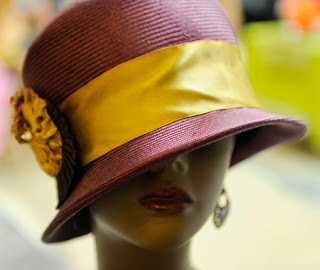 Although I don't make hats entirely how I was taught, there are many critical techniques I will never abandon.   For example, I would never leave this type of brim (purple hat) unfinished and razor flat.  You may say, it is finished, and if you said that, chances are you were never taught how to finish a brim that doubles back under when taken from the hat block.  That's why this brim stands at attention and will always do so when finished correctly, because of the structure behind it.  The same goes for many small hats and the underlying structures that many milliners fail to incorporate into those finished hats today, especially those hats made on vintage blocks.

So how do you polish your felt hats, or how do you conceal your machine stitching when sewing felt hats by sewing machine or by hand to get that rich finish look, rather than that manufactured look. How do you finish your cut felt brims?  What do you remove from your felt hats after you block them to remove some of that dull look before polishing?  Unless you are using a European style hat block (having no rope lines, usually pinned underneath) rather than an American style block (having real estate for rope lines), you should understand why all of that pinning may not yield any better results than a single rope or two, thus saving your blocks from destruction.

Do you know what an open crown block is?  No it's not a hat block with a hole in the middle.  But many men use them to block their unshaped hats, only to put the details in by hand.  This is a great technique to incorporated into women hats for those of you that are so dependent on hat blocks and are frustrated because you feel that you have to purchase every block that comes along, but you don't have the budget to purchase them.

Finally, if you look at your blocked felt or straw hats and they look like they have cellulite (they're not smooth after blocking), their brims are undulating and look like they are frozen in a 120-mile wind storm, you still have more to learn about felt and straw blocking.

Posted by Lee Duncan is HatStruck at 2:10 PM 0 comments 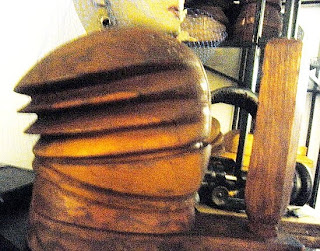 I know, I know, it's a crappy picture.  But I just didn't want to do a photo shoot this evening.  I needed an image to put up with this class reminder/announcement.  I know that I'm more likely to look at a picture rather than read a lot of text.  Anyway, I think this is a 1920s cloche block.  What do you think?  I see at least four styles, hat designs, in this one block, possibly more if I think more about it. It's a shame that most hat blocks were destroyed after every season to prevent copying.  Such beautiful things.  ...and if  a hat is created and put into the public domain, isn't it already out there?  I don't understand the reasoning,  Oh well abut the class and a few more details.

The Class, the Wonderful Class!


For those that are interested, I am offering a two-day, seven-hour straw and felt blocking class. The class will include blocking and finishing, sizing, polishing (fur felt), trimming, simple silk and leather flower making, etc.

Along side millinery instruction and as requested, I will be teaching hatting (the making of men hats) techniques, including valuable techniques that set men hats apart from women hats. The class will learn how to use open crown hat blocks (plain blocks, having no definition) and how to "bash (crease and telescope)" their hats by hand in order to achieve a number of popular men shapes (fedora, cowboy, pork pie) .

This is a two-day class, and it will be held July 27 and August 3, 10:00 a.m. to 1:30 p.m., in Southern California, South Bay area, Torrance, California. The cost of the class is $245.  One straw and one felt (wool or fur--by request) and trim are included in the cost of the class. Homework required.  This class is suitable for all levels.  I'm sure advance students will benefit because I use some hatting techniques when making my own hats, techniques that many milliners do not use..

Posted by Lee Duncan is HatStruck at 11:12 PM 8 comments